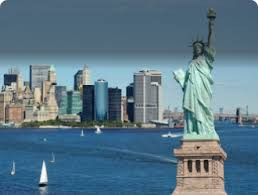 Join Kline Tours for a trip to the Statue of Liberty on Saturday June 25. Cost is $115 for Adults, $105 for Children 12 & Under.  Price includes bus transportation to Liberty State Park, NJ and ferry ride to Statue of Liberty and Ellis Island. Departures from Hagerstown, Greencastle and Chambersburg.

·  Visitors to the Statue of Liberty and Ellis Island must pass through primary security screening (similar to airport security procedures) before boarding the ferry system.

We Don't Allow Them, So Please Don't Bring Them

Ellis Island is part of the Statue of Liberty National Monument. It was added to the National Park System in May of 1965 and through extensive restoration, its main building opened over a quarter century later on September 10, 1990 as a national museum of immigration. Ellis Island is federal property partly within the territorial jurisdiction of the both the States of New York and New Jersey.